Progress Despite It All

Although this summer has been tough in many ways with Janey, I'm realizing it's also been a summer of huge progress.  The two may be connected.  The last week has seen a big decrease in the screaming and crying, and I'm able to relax a little and take stock of what Janey has been doing, and it's quite encouraging!

First, her speech.  She has been talking in ways we haven't heard before, or have heard only on very rare occasions.  A few examples---the other day, Tony took Freddy and Janey to Chipolte on the way home from getting Freddy at work.  After they ate (and Janey was good for eating, progress in itself!), Janey said "Do you want me to clear the table?"  All mouths dropped open!  That's usually what one of us says after a meal there, but who would have ever guessed she'd say it!  Tony gave her some napkins to clear, which made her very happy.  Another time we were all in the car, discussing our favorite foods (not an uncommon topic in our food obsessed family).  All of a sudden, Janey yelled out "Indian chicken!"  She actually joined the conversation and told us her favorite food!  A few nights ago, she craved some Chinese rice (fried rice) and Tony ordered some.  We all walked to the square near us to pick it up, and on the way home, Janey jumped up and down excitedly and said "I'm almost having Chinese rice!"  I know I've NEVER heard her use a word like "almost" correctly before.  We were thrilled.

Janey has also started to seem to differentiate between family members more than ever before.  Usually in the past, it seemed like we were fairly interchangeable to her.  But this summer, we have been assigned roles.  If  Janey wants Netflix or a video, only I am able to put it on.  But if she wants food, that's Daddy's job.  Last night as I opened the fridge, she sneaked out a jar of mayonnaise, and immediately took it over to Daddy to see if he'd give her some, sliding past my attempt to grab it.  She knew he was far more likely to give in on that one than I was.  She has also been calling the boys by name.  The other day, William came into the back yard where she was playing, and she called out loudly "Hi, William!" which made him very happy!

Janey is also showing an interest in drawing and writing, which is totally new.  She has never drawn anything recognizable, but she might come by that naturally, as neither have I, really!  But I got her a sketch pad the other day, which she was eager to use.  Below is the very first thing she wrote in it... 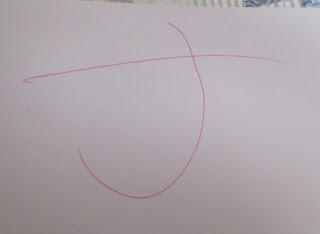 Yes, it's a J!  I was so happy.  You can see an example of my artwork in this next picture, where I asked Janey to put the mouth on a face...  (I drew the face, and Janey drew the mouth) 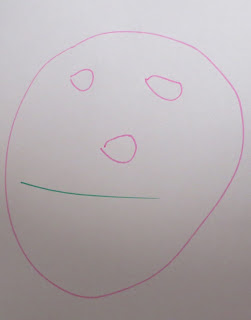 I was happy she got what I meant, and added the mouth quickly!

Lastly, Janey is showing signs of wanting more independence.  This one is harder for me to accept.  For her whole life, Janey has held my hands when outside anywhere but in our own driveway or back yard.  She has been just too prone to running away or doing impulsive things for me to let go.  However, lately she is constantly dropping my hand and wanting to walk on her own.  I started giving in, slowly at first, but I'm realizing something amazing---she is staying with me!  She's walking on her own at my pace!  It still makes me very nervous, but she is almost 9, and it makes sense she wants to not always be holding my hand.  She loves to do things like walk along a crack in the sidewalk or run her hands along trees or walls, and now she can do that.  This morning, as we walked to summertime school, we got to a place where we have to walk next to buses.  This is where I usually grab Janey's hand, and as I was about to, she took my hand.  It showed me she is aware of safety and her surrounding more than she ever was, and knew we were in an area she needed help with.

So, despite the very tough times here and there that this summer has brought, I hope, and I shouldn't even write it to not jinx it, but I'm knocking on wood---that at some point in the future we may see the summer of 13 as a turning point.  I hope so---I dream so.
Posted by Suzanne at 9:29 AM

The "J"!!!!!!!! That beautiful, glorious "J"!!! Such a wonderful skill to have - the building blocks to writing her own name! I'm just so thrilled for you and her! Funny how the little things really are the biggest of things...