Janey is nine today.  Most other years, on her birthday I wrote sort of a summing up of how she was doing.  Today, though, I thought I'd write more about her birthday itself, as a way to share the ups and downs of special days with a child with autism.

The last few days, I've been talking a lot to Janey about her birthday, trying to get her prepared.  I knew they were having a party for her at summer school, as it was her last day there and her birthday, and I wanted her to get used to the idea.  I sang her the birthday song quite a bit, which she sometimes has a hard time with, as do very many kids on the spectrum.  I think with Janey, part of it is that the song is often sung off-key, and that upsets her a lot.  But it's also a time when all attention is focused on her, and that can be too hard, too.

I decided I wanted Janey's birthday to be as low-key as possible, and wanted to do things she would enjoy all day.  The time while she was at school, I planned to focus on her brother, who shares her birthday.  He turned 16 today, and I always want to make sure his birthday is special as well as Janey's.  As their needs are obviously very different, it can make for some tough decisions.

Janey started the day in a mood.  She didn't like the clothes I tried to put on her, and threw a tantrum and screamed.  I decided what clothes she wore was less important than her having a calm day, so I let her choose her clothes herself, and she made a pretty nice choice, and was happy by the time we left for school... 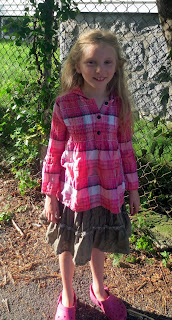 While she was at school, the rest of us went to the mall, and got Freddy his present, a couple pairs of sneakers.  I managed also to get a few presents for Janey, at a nice store at the mall called Marbles, the Brain Store.  I went there because I'd read they have a lot of toys that work well for autistic kids, and they did---most for higher functioning kids, but I got Janey a very cool circle of wooden balls of various colors, which is sort of a big fidget toy, and also a wooden robot that can be folded up into a square.  No pieces to lose with either, they look nice and they are something she can play around with.  I felt very happy to find them.

Then we went to pick up Janey, and it seemed she had a great day.  They really did it up for her!  Here's a picture... 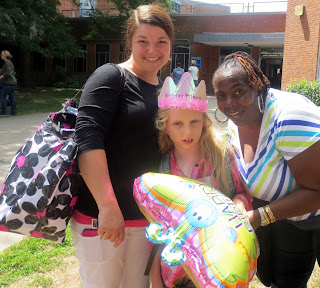 of Janey with her teacher and one of her paraprofessionals.  They gave her cake, pizza, a balloon, a bag of presents---she is a lucky girl!   She left the school happily, walking along with Freddy, her birthday twin. 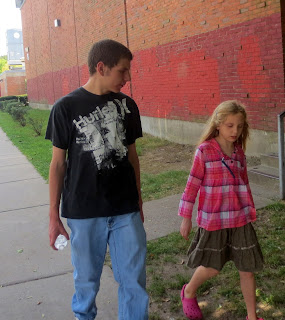 Then we went to a friend's house.  She wanted to give a present to Janey and Freddy.  That was probably the high point of Janey's day, as she loved the present, a giant pillow (thanks, Christine!!).  She was happy there, but we just stayed a short time as we were headed to the store for cake. 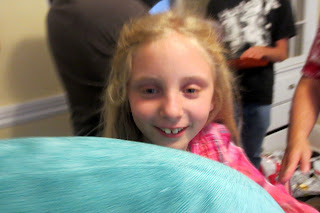 Janey was good at the store and picked out her own cake, and we headed home for a little family party with just us and Janey's uncle.  That is when things started to go downhill.  I guess Janey had had enough birthday.  I think she was tired, and just wanted cake without all the ceremony.  We did the candles and sang, and I tried to get a picture of Janey as we sang.  I have always vowed not to take pictures of Janey as she cries, but this time, it just happened.  I have been trying to decide whether to put this picture on here, and decided I would.  I've always tried to be honest when writing, and Janey's screaming and sadness are a huge part of her life.  It would seem kind of untrue to her to only post happy or neutral pictures.  So here's Janey, very sad about the birthday song and candles... 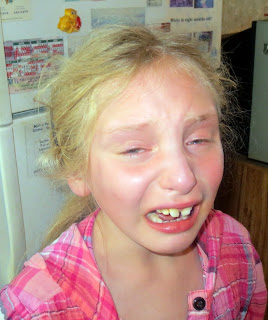 Janey actually cheered up a good deal in just a minute after that, when it was finally time to have the cake.  She likes blowing out candles, and she did her best, with Freddy helping too, as they shared a cake for the first time ever!  (I got a second cake for Freddy to have at a party with his friends later this weekend) 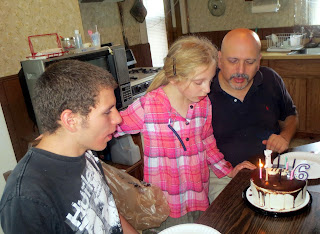 After the cake, Janey had had it.  We were upstairs at my brother-in-laws for the cake, so I took her downstairs.  She screamed and cried for quite a while.  Finally I thought to say to her "Your birthday is all over now!" which is not what you'd think the birthday girl would want to hear, but she looked hugely relieved!

It's so hard to know how to handle occasions like birthdays with Janey.  I wonder sometimes if it were just Janey's birthday, and not Freddy's too, if I would choose to almost not celebrate it, or keep it so low key as to almost not be detectable.  But somehow that doesn't seem like the right thing to do.  I want Janey to have memories of a cake, of presents (I gave her the presents just a little bit ago, unwrapped as she prefers, and she looked them over, but wasn't quite ready to be interested in them)  She certainly loved the pillow, and the cards she got, and she seemed to like the party at school.  Maybe overall she didn't cry much more than a lot of days lately, but it felt like more because I had been wanting so much to make it just a happy day for her.  But that is often impossible.  I guess I just can do what I always try to do---do the best I can and hope for the best.

Happy Birthday, Janey! And Happy Birthday Freddy! I think it's nice that the two share a birthday - in my family, we have many shared birthdays, including myself and my dad.

I think Janey picked out a great outfit - love that shirt! :)

That's funny---my sister and father share a birthday too! I guess it must run in some families!

Happy Birthday Janey!
I think she did very well. Its a lot for many people to have attention on their person all day (I don't feel very comfortable with it myself). She will have many happy memories I'm sure.
And a Happy Birthday to Freddy too!

Janey is so loved and is such a beautiful girl. You both deserve celebration, nine beautiful years together.
Our children will know it in their hearts, the memories we create together, how much they were loved.