Thank goodness, the last few days have been much better with Janey.  As so often happens with her, we have no real explanation of why she went through such a horrible period and why she came out of it, but it's great to have our happy girl back.  When she's happy like this, it's hard to even picture how bad it gets when she is so sad.  She hasn't bitten her arm in days (again, knock on wood!) and yesterday she only cried once, for just a minute.  It's been lovely.

I've had a few insights about Janey lately, probably due to thinking about her so much in trying to figure out what makes her happy or sad.  One is how very, very VERY active she is.  She is non-stop movement.  In that way she is very much like Tony, and like my mother.  She doesn't rest---she is constantly jumping, running around, asking for things, wanting to be on the go.  I don't think this is her autism; I think it's just her. The medication she is taking almost always makes kids gain weight, but weight doesn't have a chance on Janey.  Janey was like that from the start.  When I was pregnant with her, a tough troubled pregnancy, I never worried about her being still okay, as she kicked CONSTANTLY.  I used to wonder about whether she ever slept in there.  My boys were not like that, and are not like that.  They are more like me---prone to long stretches of not doing much active.  I realize that this drive to move affects her mood.  She needs to keep on the go, and when we can't, it makes her crazy.  I am very glad Tony understands this.  He instinctively knows when she needs to go outside, to get out of the houses, to do something with movement.  It also explains a little her lack of interest in books and reading.  More and more, we do think she can read, but she doesn't sit down and read, nor does Tony, although he was a great student and an Ivy League graduate.  Reading is too passive for either of them.  Here's a picture of Janey in her usual mode, running and jumping. 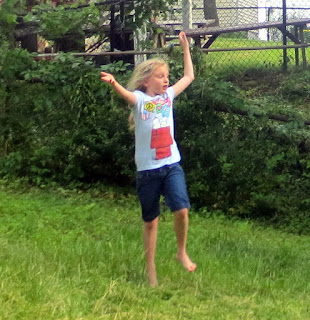 The other insight I had is how Janey not only memorizes words and music, but movements and body positions.  This came to me during one of my Total Janey Time attempts.  After school, I went into the backyard with her where we had her wading pool set up.  The day before, I had gotten into the pool with her, and she sat on my lap and played with pool toys.  That day was very hot, but this next day was very cool, but Janey was determined I sit in the pool with her again.  In the spirit of Total Janey Time, I did.  Once in there, Janey kept adjusting where my legs were with her hands, and moving my arms, and pushing me to the "right" part of the pool.  I realized she wanted to completely recreate the day before, and she had a complete memory of how we were sitting that day.  This is something I remember Janey doing way, way back, once I thought about it.  Her first year is often a blur in my mind, but I recalled playing with her at 10 months or so and having her put my hands in different positions, wanting me to play in a certain way that I realized was how we had played previously.  The insight also explains Janey's amazing ability to dance.  She channels any dancer she's seen---copying their moves exactly.  That's probably what led to the most amazing moment pretty much of Janey's life and ours---that day Michael Jackson died, when we put on some of his music and she danced EXACTLY as he did.  I think now she must have at some point seem Billie Jean being danced to, and recalled it exactly.  It must be hard having this kind of recall, because other people don't remember exactly how they moved previously.  I wonder if that causes a lot of Janey's tantrums.  She remembers a good time, tries to get another person to recreate it, and they just can't, and she doesn't know how to explain what she wants them to do.

Here's hoping Janey's good times keep up for a long time, and that I keep figuring her out, a little bit at a time.
Posted by Suzanne at 8:10 AM

She's a special girl and I mean that without a shadow of patronization. I'm glad she settled. It's hard that she needs to recreate the "perfect moment" I'm sure it causes her anxiety. As someone with a bit of OCD-like tendencies I can understand the feeling in a small degree. Wonder if some OCD-targeting therapy would work on her?