Janey has had a tough week.  After almost two months handling the quarentine like a champ, I think she's had enough.  She's been screaming and acting out much of the day, every day, staying up most of the night and sleeping during the days, tossing things around---just not happy.  Last night she had been yelling for hours. Out of desperation, I turned to her iPad's talking programs.  Using the one program she seems to like, Proloquo2Go, I went to the feelings page and asked her to please tell me what she was feeling.  Without hesitation, she picked "hate".  And pushed it over and over and over.  Fair enough.  Then I went to the body parts page to ask her if anything hurt.  She picked "feet", which is something she often picks.  I asked her if she needed a foot rub and she said yes, so we did that, and then she went to the program and picked "legs" and "arms", so I gave her a leg and arm rub too.  Then she exited the program and told me to go away.  The rest of the night was far better---she slept well and didn't scream at all. 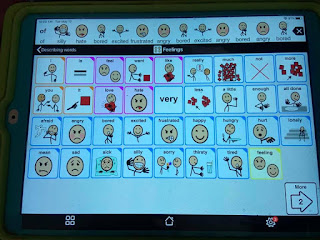 So...why don't we use the "talker", as we call it, more?  Because Janey won't.  We've tried and tried.  I've read whatever I could on using it.  I've tried modeling, tried having it open near her as much as we can, tried programming words she might want into it, tried all I can think of.  Most of the time, she strongly rejects it.  She's several times used her limited speech to say "I CAN TALK" when I try to get her to use it, when I've said how it can help her talk.  I don't know why she doesn't like it more.  But I have respected her wishes, partly because trying to force her to do anything is a losing game.  So for quite a while, we haven't even tried it much.

I realized last night that part of why I don't try it more is that I was a little obsessed with using it "right".  I wanted to have her learn to use it for sentences, to move between screens, to try new words with it.  But the times it worked best was when I first went to a screen with a theme, like I did last night, feelings or body parts, or foods or colors or things like that.  She readily chooses when I do that.  I think she can read the words some, and uses them more than the pictures, but I have no way to prove that.  But I am going to try to more often just open a screen for her and let her pick.

This morning, I pulled up the feelings screen again.  Instantly, Janey picked "Frustrated, Angry, Bored" in rapid succession.  Well, that about says it all about life being stuck at home.  I told her I felt the same way, and I wish there was more we could do to help.  The biggest problem right now is masks.  Janey will not wear a mask, and it's the law here in Massachusetts that masks must be worn in public.  There is an exception for people with special needs, and I know we could use that, but the other part of it is that we believe in the masks, and are very scared of getting sick.  Aside from the disaster that Janey getting COVID-19 would be, if she gave it to Tony or me, we could get very, very sick.  So, while the virus is still badly raging in this area, we are stuck.  We can go for car rides to nowhere or play in the driveway, but that's about it.  And who wouldn't be frustrated, angry and bored----especially if you were 15?

This whole virus life is hard on everyone, but especially hard on kids like Janey.  She doesn't have friends to text or FaceTime with.  She doesn't read books.  She can't take walks even right now...if she would wear a mask, there's still the problem of her touching everything in sight.  She is stuck in an endless dull day.  And we are trying, but it's hard to break up the boredom.  I'm surprised it took her as long as it did to get angry.

Thank you for sharing. I love your posts. And I love your Janey (I have a Jane, too!) This whole COVID thing is such a drag, and I am sorry that Janey is struggling. But I am so impressed at how readily (and accurately!) she labeled her emotions on the talker. And the “I can talk” bit sounds like a bit of teenage defiance! Hope things start to ease up soon.