How Janey would tell the bus story

The start of this school year was marked by bus issues.  The buses that Janey had assigned to her did not have aides on them, and several times, the morning bus simply drove by our house as Tony tried desperately to wave it down.  He wound up driving Janey to school those days.  The afternoon bus twice drove her home without an aide, breaking their own rule (the aide for Janey is not something we requested, but something the transportation department had said she needs) and twice relied on a school aide kindly riding with Janey so she could get home.  Knock on wood, these issues seem to be resolved, thanks to Janey's terrific principal advocating for her.  Janey is on new buses, ones with aides.

I've been struggling to explain to myself and in this blog why the whole bus issue upset me so much.  Every way I tried to write about it, I found myself reading what I wrote and thinking "Yeah, that doesn't sound like such a big deal"  Then, looking at some pictures I took today, I realized that it's a big deal to me because it was a big deal to Janey.  She loves the bus.  She loves routine.  She loves things happening the way they are supposed to happen.  And the fact that it seemed, on the surface anyway, that the bus department didn't consider it a priority to get her to school, bothered me a lot.

Janey doesn't talk verbally that much, but she talks volumes with her behavior and her facial expressions.  Here's the story of the bus issues, translated by me.  Forgive me, Janey, if I have made mistakes!

"I am so excited to go on the school bus to school!  I love riding the bus" 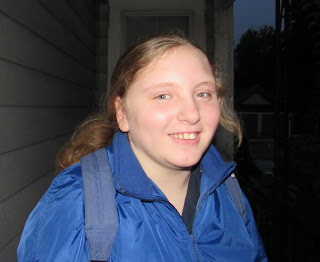 "Daddy and I are waiting for the bus. It's coming!  Oh, it's not stopping.  Daddy is trying to get the bus to stop.  Why can't I go on the bus?" 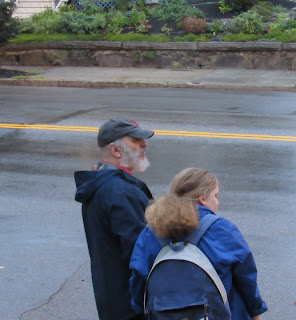 "Daddy is driving me to school.  I love to ride in the car, but this isn't right.  I don't go to school in a car!  Daddy is saying goodbye and I am with my teacher, but it's all wrong.  It doesn't feel right.  I'm crying because it's not the way it's supposed to be"

It is the little things, the small inequalities, the minor, not big enough to make a big deal of issues that sometimes are the toughest.  So the transportation department originally assigned Janey to a bus that by their own rules, she couldn't take?  It's fixed now, so why does it still bother me?  Because it's a million small moments like this that add up to block Janey from being fully included.  It's not just the bus passing her by---it's all the times that the small adjustments that would allow her to ride life's bus with everyone else are not made. 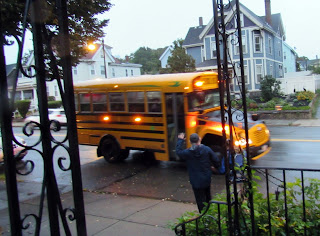 I'm glad they got it together. I love the new picture of Janey. She is a beautiful soul and it shows on the outside.