"How was school today?"

Shortly after Janey started K0, which here in Boston is what they call public preschool for 3 year olds, I asked her one day after picking her up how school was.  She said "We did music with Mr. Tim.  We sang a snowflake song"  I was a little doubtful, as it seemed early in the year for songs about snowflakes, but I asked her to sing it and she sang a little.  That's all I remember about that conversation.  I wish I remembered more.  It was the only time Janey was to ever tell me about her day in school.

Writing that, I'm crying a bit.  I don't like that much to think about Janey pre-regression.  Her regression was late and severe.  It started a bit before she started K0, a class she was in not at all on an IEP or in special ed, but that she got into because Freddy was at that time in 5th grade in the same school.  The first day of school, I mentioned to the special ed teacher in the classroom (as it was an inclusion school and each room had both a regular ed teacher and a special ed teacher) that I was starting to have some concerns about Janey, and I asked him to let me know if he saw anything that made him share those concerns as he got to know her.  It was only about a month into the year when he said he did, and it was a couple months after that that Janey was formally diagnosed as autistic.  During those months, she lost nearly all her speech.  It has never returned to the level it was when she was two.

I am very grateful that Janey does speak verbally at all.  I know it's something never to take for granted, something that so many mothers of children like Janey would love to hear, to hear a single word ever from their child.

During our cross country trip, during which Janey turned three, just before starting the K0 class, we stopped at the Custer National Battlefield in South Dakota.  In the gift shop, Janey saw a family with a girl about her age.  She walked up to them and said "Hi!  I'm Beautiful Janey!"  We still laugh often at that.  She had been hearing from relatives we visited on our trip all the time how beautiful she was, and I guess she'd internalized it pretty well.  I remember that moment so vividly.  It was another last, the last time I remember her ever introducing herself.

Another time, shortly before the trip, Janey started singing "Elmo's got a gun..."  I asked her where she had heard such a thing, and she said "Freddy showed it to me, on the internet"  There was a Sesame Street parody video featuring that song, and Freddy owned up.  That was the one and only time ever she told on her brother. 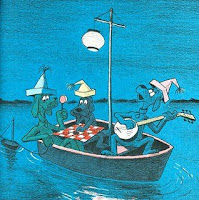 For a long time, I thought Janey's speech would some day come back to where it was when she was two.  It ebbs and flows, but it's never come close to that level.  Sometimes I read old blog entries and realize that it's not as good now as it was when she was around 6 or 7.

Janey knows a lot of words, words that seem stored and that come out only on rare occasions.  A few days ago, I was reading her "Go Dog Go", her favorite book, and for some reason I asked her what the dogs on the boat on one page were playing, and she said easily and quickly "A banjo" which was completely correct.  I had no idea she knew that word, or other words she's used in that same context, to answer a direct identification question---"raccoon", "drawbridge", "crab", "volcano"---to name a few I can think of.  But in daily life, she uses mostly one sentence, modified slightly for what she wants..."I want cheese.  I want soda.  I want snuggle on Mama's bed"

Every day, every single day, when Janey gets off the bus, I ask "How was school today?" Every day, she doesn't answer.  I don't know if she ever will again.  And I wish, like the old song, I could have saved time in a bottle, and could hear again that one time that she did tell me how her day was.  I wish that a lot.
Posted by Suzanne at 7:40 PM