When the boys were young, before Janey was born, I read a parenting book that talked about the importance of having a family motto, a family mission statement.  I wasn't really sold, especially because most of the examples given in the book were of families developing a motto that spoke to how important high academic achievement, or charitable giving, or constantly striving for excellence were, and unless most kids the ages of mine were far more forward looking than my boys, I didn't buy it.  But out of curiosity, I asked Tony what he would pick for a family motto, and he said "Enjoy Life!" 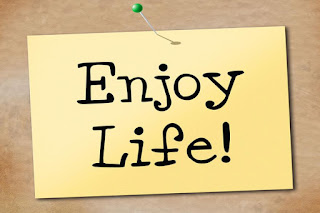 I've thought often that really is pretty much our family motto.  Of course, there needs to be a background of The Golden Rule type thinking, because if enjoying yourself involves hitting each other or petty crime, that isn't what we are going for.  And I hope we taught the kids basic respect---for us as parents, for teachers and friends and themselves.  But when it comes down to it, life is pretty short, and if you aren't enjoying yourself at least a good deal of the time, something probably needs to change.

What's making me think of this motto lately is a few essays or posts I read by autism parents lately.  (and here I should include a thank you to the amazing mother of Sophie, who has a Facebook page I greatly recommend, "On the Train With Sophie", as I don't do a lot of reading about autism online, and I wouldn't have read the posts unless she had referred to them on her page).  One was a video post by a mother talking about the sadness she felt over realizing her son, basically, wasn't ever going to be typical.  The other was about going to see Elmo on stage, how a mother had to force her son to go and endure the stares of those around her.

I won't put down the mothers involved, or judge them.  It's a long journey with all mothers of autistic children, and we all aren't going to agree or feel the same as each other at every point.

However, I realized that the motto we made up in a laughing moment years ago has actually helped a good deal with how we view Janey and how we make decisions about and for her.

I've despaired often as I've gone through life with Janey (and life in general, of course) but I don't think I've ever felt despair specifically that she was not ever going to be typical.  Most of the despair I've felt is that she wasn't happy, and that I wasn't happy, all of us weren't happy, because we couldn't find a way to help her be happy.  The fact that she will never go to college, or have a job, or live on her own---I wish she could do those things, because they can be sources of happiness, but they certainly aren't the only route in life to happiness.  More than I'd have guessed, the academic and vocational limitations that Janey has don't really upset me at all.  And that ties back to the family motto.  You can certainly enjoy life without college, or a job, or your own home.  Sometimes those very things bring a lot of UNhappiness.

There isn't any one right way to be happy.  The mother knowing that if somehow she could get her child to go see Elmo, he would like it---well, maybe, but the pain to get there?  There are a lot of things in life Janey might enjoy if we worked hard at getting her there, but is it necessary?  There's a lot she enjoys hugely that she can do right now.  Happiness doesn't need to be mainstream.  Janey loves to ride aimlessly in the car listening to music.  She loves to watch certain episodes of TV shows time and again.  She loves to have her father cook for her.  She loves to "steal" our coffee on weekends.  She loves to take showers.  She loves to eat chips in the driveway while the stray cats try to get some.  She loves to dance with her brothers. So---maybe she'd love Disneyworld, for example.  But first we'd have to get her on a plane, we'd have to get her used to long lines, we'd have to keep her contented somehow while we waited for the special moments she might really enjoy.  Is it worth it?

Of course, there is more to life than enjoyment.  But as a goal, as a motto, I think it works well, perhaps especially for Janey.  There is so much of life that is hard for her, just by being someone living a bit less typical a life than most.  So why not aim for as much of her life to be happy as we can?  Why despair over what she isn't going to do, when we can instead try to make what she CAN do enjoyable for her?
Posted by Suzanne at 2:41 PM