Every Morning is a Triumph

I just got Janey on the bus, at 6:15 am.  As I walked in the house, I was beating myself up a bit.  Her hair wasn't as I'd like it, she had sneaked some onion and garlic chips and her breath betrayed that, she had on two different gloves, her hastily picked clothes were not the greatest look for her...it was not my finest early morning parenting day.  But then I defiantly told myself---NO.  Getting her on that bus at that hour was a triumph.  It was the kind of triumph all you parents of other kids like Janey have every day.

It was a triumph Janey got a full night's sleep, and woke up without protest.  Sleep is not something any of us take for granted.

It was a triumph that I got Janey dressed.  I felt guilty thinking how I should be insisting on her dressing herself more in the mornings.  But doing so would necessitate getting up about an hour earlier.  We are on a very tight schedule every morning, and I'll take her cooperation over her independence when it comes to quick dressing any day.

It was a triumph I did her hair at all.  I know there are a few tangles.  I hate that.  But as I worked to brush them out, Janey screamed and had the look in her eyes that let me know that if I kept going, there was no way on earth we'd be getting on that bus.  So I resolved to brush them out before bed tonight, and I did my unskillful braid hairdo, and we called it good enough. 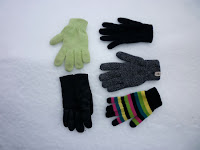 It was a triumph I brushed Janey's teeth well---twice.  She allows a thorough brushing without complaining.  The second thorough brushing came after she found the chips while I rushed to get dressed myself.  I think she might still have a little onion and garlic breath, but so be it. I am glad Janey eats breakfast at school, but a little chip appetizer isn't a huge deal.

It was a triumph that Janey left the house with a coat, a hat, a scarf and gloves.  The gloves were two totally different gloves, both right hand ones.  They are approximately the 30th pair of gloves she's had this winter.  She doesn't keep track of things like gloves or scarves.  If I were to buy her a matching set every time an old set disappeared, our entire budget would be spent on gloves and scarves.  So finding two to put on is a win, a triumph.

It was a triumph we were on the sidewalk two minutes before the bus arrived, and Janey was happy.  I had to grab my phone at the last minute so I could put on the SpongeBob songs she currently needs while waiting.  If the connection had been down or if I hadn't been able to immediately locate my phone, we would have had a problem, to say the least.

It was a triumph she got on the bus on her own, and sat in a different seat than usual, as I saw the aide tell her to.  She is like Sheldon on "The Big Bang Theory"---she doesn't care for being made to sit in the wrong place.  But she did, without protest.

It is a triumph that she is off to school.

I think those who teach kids with autism understand the triumphs that every successful morning include.  To anyone else out there who might not, when you see Janey, hair not looking perfect, gloves unmatched, hint of chips on her face, when you see that, keep in mind the triumphs it took to get through the morning.  To the other parents like myself---here's a coffee toast to you. May you have many, many small triumphs today.
Posted by Suzanne at 6:49 AM