Last night, Janey said "I want to watch...." Then she stopped, and I could see she couldn't find the name of the show she wanted.  She started over "I want to watch...", and then did the same thing several more times.  Something about how she was saying it made me not jump in.  She had the look and the sound of someone who is searching for a word, who knows what they want to say but just can't quite bring the word up that moment.

When she started to look upset, which took a few tries, I did what I often do, and gave her a sentence with a blank.  I said "The show I want is named..."  I'm not sure why, but that sometimes makes it easier for her to fill in.  But this time, she didn't.  She kept looking at me, and the look started to break my heart.  It was lost, almost scared.  It was a look that said "Why can't I say this?  Why is what I need to say so hard to say?"

Janey's talking goes up and down.  There are times she talks more, and times she talks less.  We're in a low ebb right now, quite low.  I don't panic over this, because over and over I've seen that the talking will come back to higher levels in time.  But somehow, this felt like the first time she was aware of her own trouble finding words.  I could be reading too much into her look, but over time, I've gotten pretty good at reading her face. 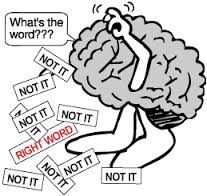 After a few more attempts by me to give her a fill-in-the-blank, she said "The show I want is the show".  I then did what I had hoped to avoid.  I started listing shows she might want---"The show I want is..Angelina?  Blue's Clues?  Beauty and the Beast?   Kipper?  Wonder Pets?  Dora?  Barney?  Courage the Cowardly Dog?   Backyardigans?"  She stopped me there and said "Backyardigans"  So I put that on, and she seemed fairly content.  But still, I got the feeling that she simply was tired of the whole thing, and that she picked a show that didn't sound bad, not the show that she was really thinking of.

I thought about this incident a lot last night and this morning.  I wondered how I could have handled it better.  I wish she could manage the TV remote and pick the show herself, but it's so complicated to use Amazon Fire TV to pick a show that might be on Amazon Prime, Hulu or Netflix, that might be a video we've bought or one that is on the air---all of us have trouble with it.  I could try to get her to watch videos on her iPad instead, but she is very clear when she wants the big TV and not the iPad.  I could have a page of pictures of shows she likes to point to, but she rejects that kind of solution at home almost always, and even if she didn't, the list is limited to ones I think of, not all the ones that exist.

What I really wish is that she could learn more word retrieval skills.  She has a very good speech therapist at school right now, but her time with the therapist is limited, and I have the feeling there might be specific kinds of therapy that most help with word retrieval.  A few months back, I started trying to find a place for her to get outside speech therapy, and found it was far from easy.  There are lots of places that do autism therapies, but they are almost all exclusively ABA, and most word with kids under 13 only.  Janey will be 13 in two months. I have found iPad programs specifically to help with word retrieval, but they are aimed at people without intellectual disabilities, and quite honestly are far beyond Janey's abilities.

Before school this morning, I stopped Janey and said to her "I know sometimes it's hard for you when you can't find the word you want to say.  That must be very frustrating.  I saw how sad it made you last night.  I want to help you with that, and so does Daddy, and everyone at school"  I have no way of knowing how much she understood, but I am glad I said it, and she listened, and smiled at me.

There is so much about Janey that is mysterious to me.  How often does she settle for shows she doesn't really want, food that isn't what she is aiming for, songs playing that aren't really the song she wants, because she doesn't have the words?  Why can she sometimes talk so much more than other times?  How is it that she can remember endless song lyrics, or show dialogues, but not sometimes simple titles or names?  How can I help her?  And sometimes I ask myself the hardest questions of all---how is this fair for her?  Why does she have to struggle to be understood?  What would her life be like if she could talk more readily?  Those last ones don't have answers, I know---or if they do, they are beyond my own word retrieval skills.
Posted by Suzanne at 12:58 PM