It's hard to explain exactly, but lately we are seeing something in Janey that is new and wonderful.  She is talking a little more, but it's not just that---it's a change in how she seems, in how she connects.  It's not there all the time, and it can be hard to describe, but when we see it, Tony and I look at each other in amazement.

I'll try to describe the latest incident.  Janey came home from school the other day very upset.  It seemed she was in pain---she was grabbing her belly and twisting around a bit.  It looked to us like gas pain, or pain from constipation.  We eventually gave her some Tums, hoping to help her feel better, and after a while, she did seem to feel much better.

As we were lying down with her at bedtime, we were talking about the Tums.  I said to Tony "I think they work by taking big bubbles in the stomach and breaking them down into little bubbles, so they can get out"  I wasn't talking to Janey, or doing what we sometimes do, talking to Tony in terms we thought Janey would understand, so she could listen indirectly.  Doing that often seems easier for her than talking to her straight on---it's like there is less pressure, so she hears without feeling pressured to respond.  But that's not what I was doing right then. 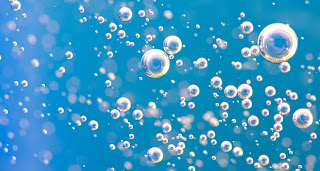 Right after I said what I said about the bubbles, Janey pointed to her belly and said "Baby bubbles?"  She said it exactly like most people would reply, in a questioning voice, like she was looking for confirmation she understood correctly.  Tony and I looked at each other in amazement.

This might not sound like a big deal to someone who doesn't know Janey, but it was something in several ways we have hardly ever seen.  First, she responded with appropriate timing---no delay.  Secondly, her tone was right on---not echoed sounding or sing-song or anything else, but just questioning.  Thirdly, she used a word we hadn't used, "baby" instead of "little"---so she wasn't quoting or repeating, she was using a synonym to clarify.

It's this little kind of thing we are seeing more and more of.  Janey seems to be, for the lack of a better word, tracking our speech more.  She seems to be following what we say and processing it in real time.

Another story---kind of a funny one.  Janey's uncle Joe often asks her "What's my name?"  It's something he did with all three kids when they were little, as a way of making conversation.  With Janey, he's been asking her that for years.  She replies or not, depending on her mood.  However, the other night, Tony was out with Joe and Janey in the car and I got a call.  Tony said "Are you sitting down?  You won't believe this"  What had happened was that Joe asked Janey, for maybe the ten-thousandth time in her life, "What's my name?" and Janey replied "You forgot your name?"

That answer---wow.  We joked that she must have been sitting on that reply for years, waiting for the right time.  It's an amazing reply to us---it shows she understand the meaning of the word "forgot", that she gets that someone would ask a question to get information, and most of all, it breaks away from a script that has been years and years in the making.

For a long time, Janey's speech didn't progress.  Our theories of why it suddenly is---Janey's having a good year of school and a good year of health.  Things have been steady and fairly upbeat.  She has a great team at school---a terrific teacher, an ABA worker we get super reports about, and a speech therapist we met her at IEP meeting that seems to get Janey in a way that we haven't seen in a speech therapist for a long time.  Those elements together, along with Janey herself maturing and learning, seem to have prompted progress where we hadn't seen it for years.

I hope very much this speech and understanding trend continues.  I am not being pessimistic but rather realistic in saying it very well might level off or regress after time---we've seen that pattern often.  However, knowing that she CAN talk and understand in the way she's been showing---it's wonderful.  It will keep us working.

In the larger picture, I want to get this out there partly to give hope to others.  There is so much emphasis on early intervention, on "crucial stages".  There is always a feeling that the necessary therapy has to happen RIGHT NOW, or never.  Janey is the proof I need to say that isn't necessarily the case.  She's making progress now, at age 12, at a rate we haven't seen since she regressed at 3.  It might not be the kind of progress that you read about, the "miracle cures", the breakthroughs, but it's progress non-the-less, and we couldn't be prouder of her.
Posted by Suzanne at 8:26 AM

Suzanne, I've been reading for years (I think someone responded to an NYTimes MotherLode article written by the parent of a kid with autism and recommended your blog).

I've never commented, I think because I fear for my online anonymity. But this post is just so wonderful. I wanted to tell you that through your lovely writing, I've come to be extremely fond of your Janey. "You forgot your name?" is hilarious. She's got something going on in that noggin, something good. That's for sure.

You made my day with your comment! Thanks so much! It truly helps me go on a lot of days thinking of people out there that know Janey through the blog and care about her without even having met her in person. We laugh like crazy every time we think of the name comment! It's been a huge treat seeing more of her personality and sense of humor lately, and it's also a treat to get to share it with kind people like you!

Janey is an enigma. You know she understands much more than she can express but these glimpses into her mind are amazing.