A few nights ago, when Tony had just come home from work, Janey went over to him and spoke the words in the title---"I am angry, Daddy".  It's hard to describe, but I think many of you are familiar with what I'm talking about when I say those moments are sort of like miracles.  They make you feel like you are in a dream, or living another reality.  For Janey to just go over and say that, and not reverse the pronouns, and state clearly how she felt---well, it's something amazing. 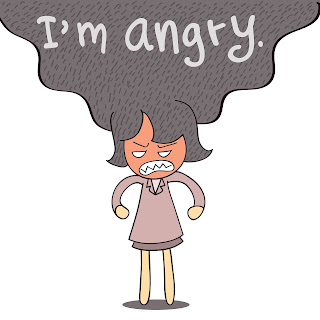 When I think about it, it's also something we have worked hard on, and so has her school.  Both the school and we have worked for years on helping her identify emotions. But still...to have her suddenly say something like that, it always feels unexpected.

I used to read a lot of books about kids with autism, before I had such a child.  Call it premonition, or something.  Now I realize many of those books were selling a bill of goods, not intentionally, of course, but still, they often showed miracle type cures, or else cures that came about by parents so devoted that no-one in the real world could ever copy their methods.  And I know, now, that some kids do change radically.  I'm not saying they don't change as a result of help from those around them, but other kids can get that same help and change much less, if at all.  You aren't going to grow a sunflower from a marigold seed, even if both get the same care.  And getting a marigold is great, not bad, but if you write a book about how you grew a sunflower from a tiny seed and anyone can do that, even those with marigold seeds...you are not quite getting it.

In those books I read about autism, I would often hear of moments like the one where Janey said what she said, and I'd think "There!  They did it!  Problem solved!"  Those of us who have now lived the life now that's not how it works.  Doing something once doesn't mean it will happen again right way, if at all.  I don't expect Janey to suddenly clearly state every feeling she has.  But it's wonderful to know she CAN.

After Janey told Tony she was angry, he did one of the twisted sentences we often do.  He said "What Daddy can do to make Janey feel less angry is....", leaving the sentence open for her ending.  We do that to sort of pre-populate a sentence, so she can fill it in.  And she did.  She said "say 'Achoo, A Sneaker, A Sandal, God Bless You"  That might not sound like it makes a lot of sense, but it does.  Janey lately loves to have us pretend to sneeze, and then to say "God bless you" to us.  And Tony often pretends to sneeze by saying "a shoe, a sneaker, a sandal..."  So, we played that game for a while.

A few days before Janey's big statement, her brothers were here working on their financial aide forms, and Janey was very upset.  I took her aside to calm her down and did some guessing, saying "Janey is angry because Daddy is busy" (he was helping the boys).  Janey repeated but changed what I said, saying "Janey is angry because William is busy"  And indeed, when I let William know she needed some attention, she was much happier.  We are realizing that often what she seems angry about is when we aren't paying her enough attention.  I think we usually used to guess she was angry about more physical things, like feeling hungry or tired or in pain, and it's so wonderful to better understand what she needs from us.

We'll keep on working on feelings.  I want to thank you, Janey, for giving us that great sentence to let us know how you feel.  Whenever you are ready to tell us anything, we will be here to listen.
Posted by Suzanne at 10:15 AM