2016.  A lot of people seem eager for this year to end, but for us, and for Janey, it was overall a good year.  It held far less ups and downs and dramas than the last few years---no burst appendix, no psychiatric hospitals, far less days of crisis.  It feels mostly like the legendary prophesy I've always heard, that life with a child like Janey gets easier in time, has come to pass.

What caused this?  Much of it is just Janey growing up, and in a way, us growing up too.  After the years of crisis, we made a decision, unconsciously, to change instead of asking Janey to change.  It's not like we woke up one morning and suddenly became radically into total acceptance, but we somehow realized that everyone is happier if we let Janey be Janey, if we embrace the things she loves and minimize the things she doesn't.

There are other factors too.  She is in a stable school situation.  I think the change of schools when she was in third grade had a huge destablizing effect for a couple years.  It was probably a necessary change, but I am not sure if I had it to do over knowing how much it would throw her off, I would have agreed to it.  But now she's been in her new school for years, and it feels familiar and comfortable to her.  The medication she is taking seems to be helping, too.  Her brothers are away at college, and although we all miss them hugely and love it when they are home, she is essentially an only child when they aren't, and she loves the undivided attention.

I'd be amiss if I didn't give credit to music, too.  Music is such a huge part of Janey's life.  She knows what she likes, and she is an extremely interactive listener.  When she hears a song she loves, you would have to be devoid of any sensory input to not know how much she loves it.  She rocks and rolls and screams in delight and asks to hear it over and over and simply shows joy that I wish every performer of the songs she loves could hear---it would be a tribute they wouldn't forget.  Her tastes are eclectic.  She loves Christmas hymns and Twisted Sister and the Beatles and banjo music and the occasional Chipmunks and too many others to mention.  There's much she doesn't like too, and she lets us know in no uncertain terms---when a song comes up that she hates, she said "I want MUSIC!", letting us know that whatever horror we are playing doesn't deserve to be called music.

I need to be honest, though, and say at times, I feel a lot of sadness over the equilibrium we have reached.  I wish I didn't, but I do.  Janey talked less in 2016 than she did in probably any year since she first regressed at 3.  That was hard to take.  Her speech has slowed down.  She uses familiar phrases and simple requests, mostly.  The other day, I was remembering a time when she was two, when we were in a waiting room and there was an old lady there, and Janey said "I don't like she!"  The lady heard and it was of course hugely embarrassing, but the thought of her expressing an opinion that directly and easily---I suddenly started to cry very hard, thinking how she can in no way do that now.  I was driving and had to pull over.  I accept Janey's speech, I am glad she talks as much as she did, but still, I must admit, I feel a huge amount of sadness and anger over whatever took her speech away.

At points this summer, I thought we might actually have the whole toilet training thing down.  But we don't.  That area has regressed badly.  Sometimes I am ready to simply admit Janey might never be trained fully.  It would be a relief to admit that.  She manages at school in underwear, but lately she comes home and immediately soaks herself, and I wonder if she is working very hard to hold in urine at school all day.  At home, although we take her to the bathroom endlessly, she very often, very very often, has "accidents", and I am starting to feel that even just thinking of them as accidents instead of just her doing the best she can do is doing her a discredit. 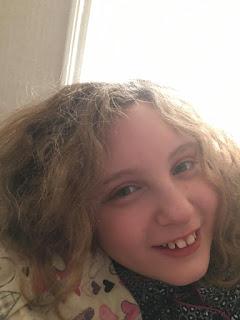 With all this being said, what I most wish I could portray with words is how much joy Janey brings us, what a wonderful person she is.  When she is happy, she is the happiest person you can imagine.  She makes everyday little things feel like the world's biggest treats---shopping for salami, hearing a great song, snuggling, sneaking a drink of coffee, giggling over nothing.  There are times Tony and I look at each other and smile, and we are both thinking that few typical 12 year old girls would love their parents as unabashedly and exuberantly as Janey does.  As I was writing this, Janey made her most common request---"Snuggle on Mama's bed?" (the bed is hers, not Mama's, but the phrase doesn't reflect that!)  As I snuggled her, I asked her if I could take her picture.  Here's that picture--messy hair and all---which might give you a little idea of the joy that girl's face can show.

Now that you are coming up on the 10th year of your blog I wonder if you might comment on the steady increase in the number of posts up to 2012 and the then the steady decrease up to 2016. I mean it's interesting that there's not a single year that doesn't match that pattern. It makes me wonder if age 8 (I think) was Janey's most interesting year for better or worse. My daughter has a couple of years to get to that stage and of course everyone is different but I wonder when or if my daughter will plateau and she will develop as far as she can.

I know what you mean about a loss of verbal skills. When my daughter was younger she could finish sentences about nursery rhymes she knew. On the other hand, she can come up with some spontaneous sentences. We went my sister's house and my daughter saw her Siamese cat and said "It's a superhero cat". That made no sense to her aunt but it did to me. The cat had a black area around her eyes which could be seen as a "mask" of sorts.