Janey starts school in a week and a half, on the Thursday after Labor Day.  Boston starts later than almost any school I know, but then of course they also stay in school much later, into late June.  Of all the weeks in the year, I'd say these weeks in between summer school and regular school are the longest feeling.  Especially this year---we had the early summer excitement of our trip to Ohio, and the later summer excitement of the big wedding, and now...nothing.  It's very, very hard to keep Janey happy during weeks like these.  Tony is at work, William is back at college and although Freddy is helping a good deal, he also is spending a lot of time with friends before he and they also go back to college.  So it's mostly Janey and me.

How do I fill the days?  I'll be honest, they have mostly been filled with TV and videos.  I don't know what I'd do without them.  It's not that I don't want to do other things.  But taking Janey anywhere on my own is so tough.  Yesterday, we did a trip to the grocery store, and that wasn't even just me---Freddy went too.  Lucky that he did, because Janey decided to fling a jar of salsa she wanted into the cart.  It might have been okay, but it hit a jar of spaghetti sauce and WHAM.  The cart and floor and all the food we'd already gotten was covered with salsa and sauce and glass.  And Janey was very excited by it all.  Freddy stayed with the cart as we waited for cleanup, and I took off with Janey to another section of the store.  We had planned to buy a lot more, but we grabbed a few things, salvaged what we could that was covered with sauce, paid for the lot and the broken stuff, and took off while the getting was good.

Early in the week, another big exciting trip, to the Rite-Aid drug store.  Janey was enjoying herself and being good until something upset her, who knows what, and she started to scream the ear-piercing scream.  It took all the calm I had to get her in shape to quickly buy my stuff and again, get out of there.

We've done some walks.  That's tricky too, as Janey will suddenly decide she's had enough, and that means she doesn't want to walk back.  I live in fear she'll get upset enough to jolt away from me and get hurt.  So we have to keep the walks extremely short, within sight of the house.

At home, I mostly serve as a show changer.  Some of Janey's shows are on Netflix, some on Hulu and some on Amazon.  Switching between them is a bit more than she can do.  She always knows exactly what she wants to watch, but the hard part is telling me.  We scroll through lists of episodes, and use a modified kind of sign language, where she points to the right or left to tell me which way to scroll, and then to herself when she finds the show she wants.  Then, because she often watches parts of shows, we have to figure out if she wants the show back at the beginning or where she left off.  It's about 50-50, but it's also 50-50 whether she'll say what she really wants.  "From the beginning" can mean "where I left off" and if I get it wrong, it's an automatic scream. 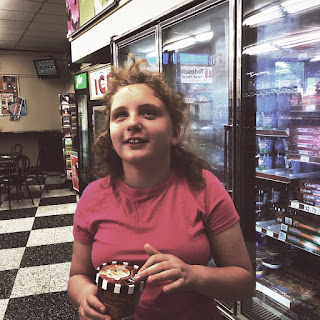 I don't mean to sound like a complainer here, although of course that's partly what I'm doing.  But what bothers me more than anything is that I feel like Janey deserves more.  I think it's a boring life for her at times like this.  I wish she was doing the kind of things I did when I was 12 at the end of the summer---spending nights at friend's houses, going for walks in the woods, reading and reading, playing cards with my sister, even working babysitting and in my mother's store.  By the time I was 12, my world was fairly open, as open as a pre-driver's world can be in the country.  Janey's world is very closed.  She has school and home.  I do feel good we went a few places this summer, but I still feel very sad at times that her world is so closed in.

I'll close with a picture of Janey doing her favorite thing during times like this, picking out a treat at the "ice cream store".  That's the highlight of her day, I think.  It's not enough, but it's something, and it makes her happy, and sometimes that is all we can do.
Posted by Suzanne at 9:36 PM

Janey's beautiful spirit is always visible in these pictures.