Janey comes to me with the remote, wanting me to put on a Netflix show.  I do, and she takes the remote back.  It gets placed on a closed laptop, precisely in the middle.  She watched a few minutes of the show, and then goes over to the remote to adjust it, to make sure it's in exactly the right place.  A few more minutes of watching, and she goes to where her shoes are.  She's previously arranged them as they always must be, left on the left and right on the right, lined up exactly next to each other.  She looks at them and does a little adjusting.  Then she touches the corner of the coffee table, then the wall in a certain place.  She looks at me.  I've broken a rule.  My legs are crossed.  She patiently takes my feet and moves my legs to the right, non-crossed position.  Then she watches a bit of her show, and then it all starts again. 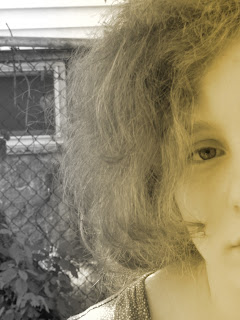 Janey has never been formally diagnosed with OCD, Obsessive Compulsive Disorder, but I am quite sure she has it.  I have more than a passing knowledge of the signs.

I've had OCD as long as my mind goes back.  It's been well under control for many years now.  It never goes away, but it affects my life very, very little.  Still, I well remember what it was like.  There are several types of OCD.  Mine was a checking one.  I needed to check that things were where they should be---my keys in my pocketbook, my pocketbook hung up.  When I was little, it was bookbags, or stuffed animals, or even little rocks I'd collected.  Checking once was no assurance.  I'd have to check over and over and over---sometimes hundreds of times.

Janey's OCD seems to fall into the arranging/symmetry category.  She needs things to be in the right place.  Not all things---she's as much of a slob as the rest of us with most things---but certain things, like her shoes, must be just right.

If you are even interested in learning more about OCD, I recently read a fantastic book about it---The Man Who Couldn't Stop, by David Adam.  It's a personal account combined with the science and psychology of the disorder, and it was one of those books which gave me about 20 "That's exactly how it is!  Now I get it!" moments.  It was terrific.

Thinking about Janey, I am quite sure I first saw the signs of OCD in her long before the autism.  As soon as she could use her hands, maybe at 7 months or so, she would move my hands to the place she wanted them to be, to hold things symmetrically.  Even that young, crossed arms or legs bothered her.

OCD is strange in that it ebbs and flows.  Years can go by with it barely showing its face, and then it pops back up badly.  Lately, it seems to be at a high level with Janey.  It's interesting---it doesn't seem to distress her a lot.  When she does the arranging, it's with a huge amount of patience.  It's like a job that must be done, hundreds of times if necessary, but with good will.  Much of what is usually distressing about OCD is that you understand what you are doing would be considered crazy by most.  When I was checking something for the 100th time, I was telling myself "STOP IT!  You KNOW it's there!  What is wrong with you?"  Maybe Janey doesn't have that inner voice telling her anything like that.  Sometimes, the OCD rituals seem to calm her.

There are times, though, that it must be awful to need something done a certain way and not be able to communicate that.  Lately, after a shower, I am not drying Janey's hair the way she feels it should be dried.  From what I could figure, I used to dry her hair some specific way, while saying "Let's dry-za-la-high-za!"  I say a lot of little things like that, as I think most people do when talking to someoen who doesn't often talk back.  We tend to want to fill the silence.  But lately, I'm somehow not saying it right or drying in the right sequence.  Janey gets very upset.  She grabs my hands and pulls then with the towel onto her head, and screams "DRY-ZA-LA-HIGH-ZA!" over and over.

The other night, after a long round with the towel, I told Janey about OCD.  Like with so many things, I have no idea how much she understood, but I told her that I know how it feels, that I've felt the same thing.  I talked to her about the shoe arranging, the remotes, the crossed legs, the drying.  I said her mind might tell her that bad things will happen if she doesn't make sure everything is in the right place, but that's her mind playing tricks on her, silly mean tricks.  I told her I understood.  She looked at me for a long time, one of those uncommon looks of connection.  I don't know what she took in, but I hope it helped, a little.

It doesn't seem fair.  If Janey does have OCD, why must she deal with that in addition to everything else?  But of course, as the classic saying goes, life isn't fair.  And in a small, strange way, it's a connection with Janey, a part of her I share, sometimes I can maybe help her with.  I'll keep trying.

I can relate to you on this in that I, too, am fairly certain that I have a mild case of OCD myself; I too have to check and re-check things, especially if I am going out and switch purses, I need to check and re-check that everything is there over and over and over again. And when I leave the house in the morning, I have to stand outside the door and twist that knob several times, even though I know I just locked it, to make sure that it really IS locked. And although I've often even said out loud to stop doing what I'm doing, I still have to do those checks. It's nice to know that you get what it's like.

I have very, very high level functioning autism, as well as anxiety and OCD. Mine is not checking or symmetry based but I do have some task oriented compulsions. I just wanted to say that I do believe Janey knows what you're saying and it is a comfort to her but I also think the OCD might actually be a help not a hinder to her autism as it gives her some level of reliability if that makes sense? I've always done my little quirks as a comfort to myself and that's made me feel better in my little out place zones. Just my two cents.