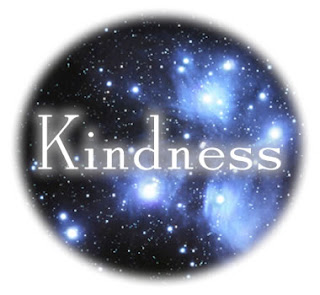 I am not sure why it is, but lately, I have found people are being extremely kind to Janey, and to us when we are with her.  It's not that people were ever usually mean, but this is a new level of kind, a heartwarming going out of their way type of kind.  It might be that people are more aware overall of autism, and so know what is going on with Janey.  It also might be that as she gets close to an adult size and height, it's completely obvious she has fairly severe special needs.  People who might have in the past thought she was just a kid acting out or being silly now can see very quickly that's not the case.  Whatever it is, I'm glad of it, and last night was a wonderful example of what I've been seeing.

We had to take Janey for a special x-ray to see if she has scoliosis.  She has a little bend at the shoulders, and has for a while.  I hope very much she doesn't have it, and it's just something from growing fast and from having abdominal surgery, but we need to have it checked out.  We had put off getting the x-ray for a while, because Janey has developed a huge fear of medical facilities.  After her tough (but good) checkup recently, we had to go back to the same building to pick up new glasses for me, and Janey, as soon as she saw where we were, started screaming hysterically.  We had to reassure her she didn't even  have to get out of the car, but she didn't totally relax until we were long gone form the place.

Last night we were at a different clinic, but Janey knew it was a medical place.  She was very, very upset.  In the waiting area for x-rays, there was just one other mother and child, but the wait was very long.  We had been there half an hour without seeing anyone come out to get people.  Janey had been screaming almost the whole time, lashing out, trying to grab my soda and throw it around, asking over and over and over to go for a ride in the car---it was very tough.  Finally, the technician came out, and I saw why it was taking so long.  I am not exaggerating when I say he looked to be about 95 years old.  I've never seen an older looking person still working.  I am glad he can still work, and I bet he's good at what he does, but he was VERY slow.  It took him a long time just to walk out into the waiting area.  I was dreading how long it would take him to help the mother and son there before us.

Then, the mother did something incredibly nice.  She went up to him and said "Please take that girl named Jane in first.  We can wait"  I almost instantly started crying, from the sheer kindness and thoughtfulness of her gesture.  I thanked her over and over.  She shrugged it off, as I have noticed most truly kind people do, and said she had taught kids with special needs and understood what it was like.

It took the technician about half an hour to do the one x-ray Janey needed, which thankfully, she stood still for, so it didn't need to be redone.  As we went back out to the lobby, I asked Janey to say thank you to the kind mother, and she did.  We thanked her once again and left feeling positive after an experience that could have otherwise been a nightmare.

I hope very much Janey doesn't have scoliosis.  It will be very tough if she does.  But like so many things, it will be made easier by the kindness of others.  The world is full of good people---many more good people than less good ones.  And I am very grateful to them all.
Posted by Suzanne at 8:16 AM