I love to take pictures.  It's a bit of an obsession with me.  Yesterday we went to a friend's lakeside cabin.  We were delighted to be invited, because Janey adores the water, boats and the friend.  I took a lot of pictures, and in looking at them, I thought a lot about how I sort out which pictures I actually keep and look at. 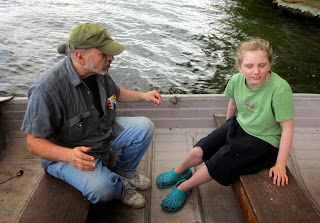 I don't save a lot of pictures of Janey when she is upset, screaming, unhappy, lashing out or crying.  There's a couple reasons for this.  Of course, I want to remember her as happy, and not sad.  Also, I've read a lot of opinions that people feel it's just wrong to post pictures of their kids when they don't look their best.  The argument usually is that it's not fair to the children.  I also, like most people, just like happy or calm pictures best. 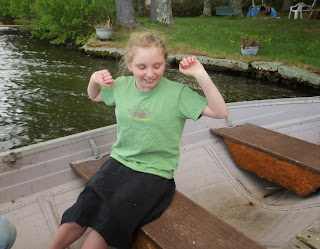 But it's striking me lately that pictures lie.  Or they don't tell all the truth.  If you look at all the pictures I have of Janey, it would be very hard to really know her story.  I don't take many pictures of her when she's biting her arm, or hitting someone, or crying hysterically, or screaming.  I take pictures where she looks, for the lack of a better word, close to "normal" 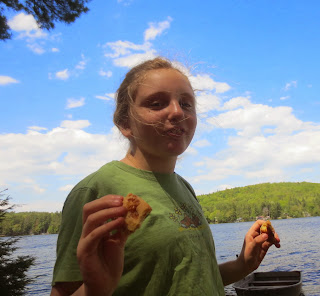 And so, when looking at yesterday's pictures, a lot got left out.  Janey had a wonderful time most of the time, yes.  She was happy in the car all the two hour ride up, she danced with happiness when we got out, she was thrilled to "ride" in the docked rowboat, she had a great time going in a little paddle boat with her father and brother, she ran around in the big yard joyfully for a long time.  But around five, the witching hour, she lost her cool.  She screamed for a long time, and then, when I tried to comfort her, bit me, very hard, on the hand.  On the ride home, she tried over and over to bite Freddy.  We came home a bit discouraged, although the majority of the day was great. 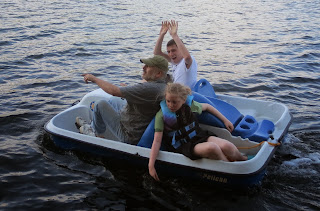 But looking back at the day, the hard parts won't be documented.  And sometimes, I think this does our kids a disservice.  I know when thinking about my life, I don't like it to be whitewashed.  I don't want to think every single moment was joy and contentment.  Is that what we want our kids to think?  Janey's anger and sadness are a big part of her life, but by blocking that out, either through choice or from societal pressure, we are left with a sanitized view.  People would be forgiven, if they didn't look further than pictures, to think autism was an interesting and quirky variation on the norm.

I don't think I'll start taking or post more pictures of Janey when she's upset, though.  I'm not quite there yet.  But I wish that I felt freer to do so, both freer from within and freer from without.