Today was the day.  After months of decisions, meetings, plans, emotions...today was the day Janey started at her new school, the Lee Elementary School, in an all-autism classroom.  Those of you who have been reading my blog a while know what a very, very tough decision this was for us.  But after talking to and thinking with many people who care about Janey, we decided it was the right decision for now.  Janey deserves the chance to see how she can do when in an atmosphere specifically for kids like her.  Leaving the Henderson school, for now, is one of the hardest things I've ever had to do in my life.  But we are hopeful it's not for good, and today, I am feeling hopeful about the Lee School. 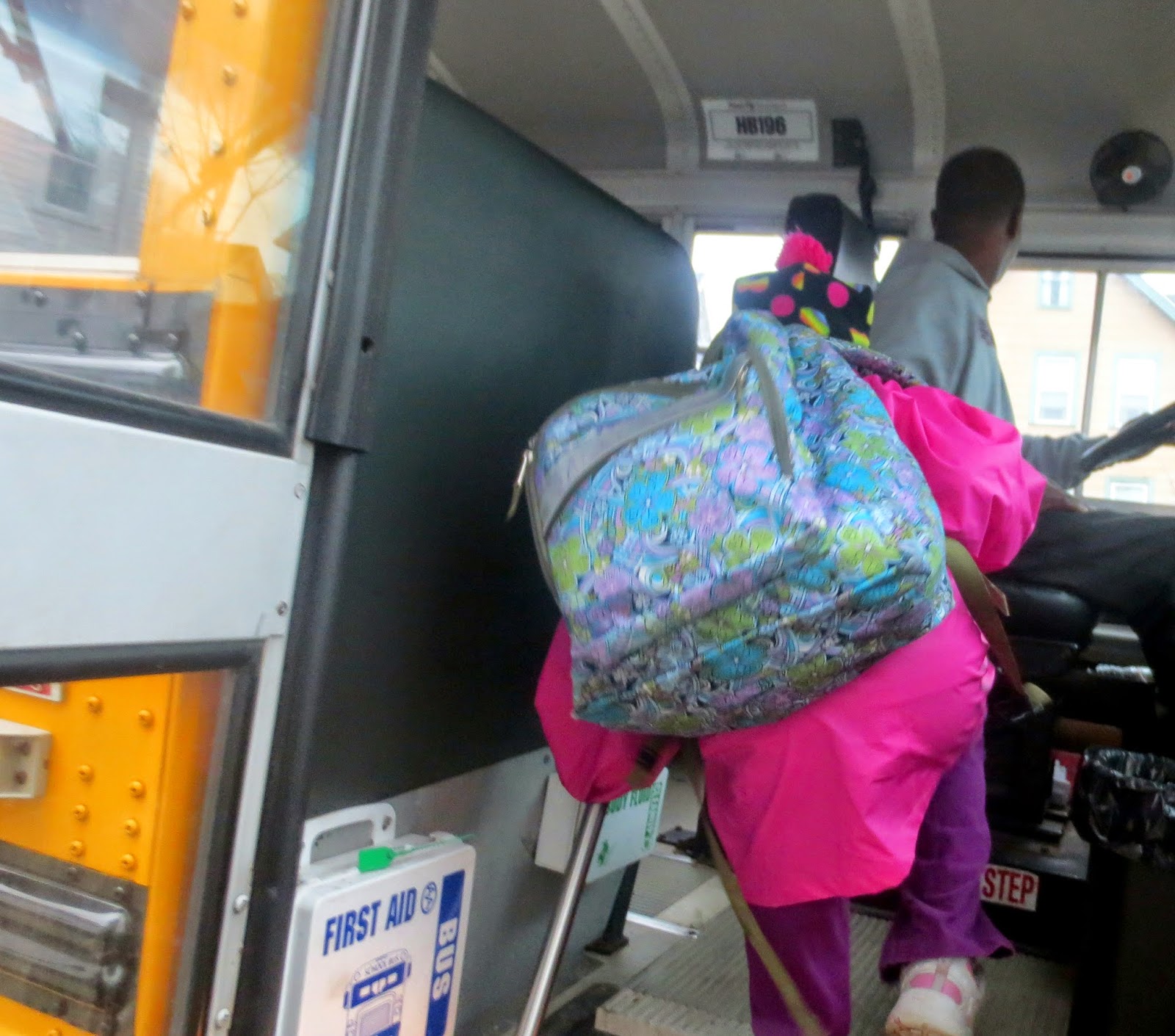 The above picture shows Janey getting on a school bus for the first time ever (except field trips).  She got on like she'd done it all her life!  We were terrified, but not her!  The bus comes VERY early (6:51am) and so we had to wake her up and get her ready MUCH earlier than she is used to (her old school is what they call here in Boston a late school---it starts at 9:15, but the Lee School is an early school, starting at 7:20)  She work up a bit reluctantly, but went out to wait for the bus willingly, and when it showed up, she hopped right on!  The bus was fairly full (not always the case here in Boston) and there was an aide to help her get settled.

Tony and I then followed the bus to her school.  We parked and walked over to where the buses were, and were there when she got off the bus.  She looked a little stunned just then, but immediately many teachers and other adults were around to help her and us.  Her teacher was out waiting for the bus, so we got to meet her right away.  She seemed great!  She offered to have us come up to the classroom with Janey and her, which we did.

Janey's only moment of upset while we were there was when we went up stairs to get to her room.  The Henderson is one floor, and I think stairs to school seemed odd to her.  But after a moment, she readily went up, and into her room.  The room was lovely---nicer than the other rooms I'd seen at that school---tidy and open and inviting.  There are 9 kids in the class, 3 of which (including Janey) are girls---unusual in an autism classroom!  A few of the boys were already there, and one cute guy said "Hey!  I know her!  I know her from the bus!" as if they were long time friends and not kids who had shared a bus a few minutes before for the first time!  We loved that.  Janey looked very happy in the room.  She noticed immediately that the teacher was pregnant (which I hadn't noticed) and went over to have a look at her belly, something she loves to do!  After just a minute or two in the room, the ABA specialist that works with Janey, Michelle, came in to be with Janey also, something that meant a great deal to me---a familiar face for Janey and for us.  Tony and I left after only 5 minutes or so, feeling confident Janey was in good hands.

So, so far so good.  I think things went as well as they did in large part because Janey's old school worked so hard to prepare her (and us).  Nobody made us feel in the slightest like we were being forced out, or not given a choice, and everyone, especially Janey's fantastic teacher Amy and the amazing principal Ms. Lampron, made sure we realized that Janey is welcome back at any time at all.  In fact, because the Lee School has a half day on Fridays, and Friday is a huge day for Freddy at school (he is participating in a major speech contest and wants us there), Janey will go back to the Henderson for the whole day Friday!  That means a lot to everyone, I think.  It made yesterday not a goodbye day but just a "see you in a few days" day.  I am as always so grateful and amazed by the love and caring that nearly every person we've ever had dealings with in the Boston public schools has shown us.

And so we start a new chapter with Janey.  I am feeling more hopeful than I had thought I'd feel.  I think the next few years might be full of a lot of surprises from her.  It's going to be a huge change, and I am well aware of Janey's tendency to have a honeymoon period at the start of new things.  I am sure there will be tough days ahead, but today was far better than I had thought it would be, and I thank everyone that has helped us get to this point.
Posted by Suzanne at 8:42 AM

I'll be praying for all of you as you begin this journey at the Lee School. I understand what you mean about a "honeymoon period" - although I do hope that things continue to go well as they started off today for Janey! It sounds like this is also a great school and she will be cared for. I look forward to hearing how things go in the next week for Janey, especially how Friday is for her back at Henderson.

I was so happy to read that so far you have a great start to her new school!!!! It sounds like she is at a great school!