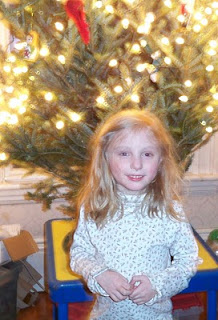 I had a tough time with Christmas this year. I'm not sure why. I never really got in the spirit---I would have been just as glad if it had somehow just not happened. I did all right in the end---I got the boys presents they liked, I put up a nice tree, we all had good food and a good day, but I did the bare minimum. No presents outside the family really, no cards, nothing major. I think Christmas depresses me more each year as somehow it really hurts that Janey doesn't understand it. That's my problem, not hers---she's perfectly happy not understanding it. She doesn't ask for toys, or wait up for Santa, or count the days. She knows carols and songs, and that's Christmas for her. I guess that's what we are all supposed to want---a child without greediness---and I have that. But I dream a little of her asking for a special toy, or being excited Christmas morning. As it was, she was completely uninterested in the toys I carefully picked out. She didn't even want to look at them---they were too new. She found an old Barbie and carried it around all day. Today she looked at the box of toys a bit more, and it was interesting watching her. She looked at one at a time, very carefully turning it to all angles to look at, and touching every part of it. Not playing with them, but I guess getting used to them.

This week is tough, though, after a mostly very good fall. Not having school is very hard on Janey---she very much needs that routine. She has fallen into her "wake up crying" routine instead, which is so so so so so hard. Once she gets crying, it's next to impossible to calm her down. She cries out requests---"I want Kipper! I want Oreos! I want milk! I want snuggle on Mama's bed!" and I try to help her, but she doesn't really want any of those, she just wants to feel better, and I can't do that. We got a lot of snow a few days ago, and we are essentially stuck in the house---the boys don't want to go anyplace, and I can't take Janey out in public on my own anymore much---it's just too scary, with her bolting ways and her sudden tantrums.

Janey's 3 year re-eval IEP meeting was wonderful. What a great bunch of people work with her. I was in tears of happiness after the meeting. I truly feel they all care about Janey, and want the very best for her. She is making some progress---painfully slow, as Janey's progress always is, but some. I felt like the woman who does ABA with her now REALLY gets her---she said Janey's vocabulary is very good, but it's actually getting the words out that is the problem, and I am glad she understands that, and is going to work on that. If you can catch Janey in the right mood and just ask her to name objects, she's a whiz. She can't tell you what they do, or show you how to use them, or use their names in a sentence, but she can sure name them.

I think what I need to deal with soon is my own depression. I don't like to admit it to myself, but I don't think I face each day lately with much vim. I dread each day, really. I am becoming more housebound, partly due to lack of money, because most anything I can think of that gets me out costs money, and partly because I'm so damn exhausted from doing all I can for Janey and the boys that I just collapse in my free time, or play Scrabble on Facebook, or read. I am not sure what I can do about the depression. I feel like it's reasonable depression---it's not out of no-place, and no therapist is going to be able to fix things---to give me money or to help with Janey. On the contrary, they will cost money. I feel like I do okay day by day, but when I stop and think about things, I fall apart.

I will include a picture here of Janey by the tree.
Posted by Suzanne at 8:14 PM

When I found your blog a few weeks ago, I literally read the entire thing from the beginning, and I've been coming back every week to see if you've updated. Your style is honest and low-key, refreshing after all the upbeat special needs blogs I find & can't relate to. Glad that you updated. I don't have an autistic daughter, I have a 3 yr. old daughter without a diagnosis - something genetic because it has the hallmarks of "a syndrome" but no specific diagnosis yet. Developmental delay is the main symptom, plus low muscle tone. But there is an autism specialist in my family, and I'm basically interested in any developmental issues and/or parents going through this special needs thing that none of us expected. Thanks for writing. Sara

Thanks so much, Sara---I can't tell you how much it means to me to hear that you like the blog. It keeps me writing! It was just for what you said that I started it---I would read a lot of blog or accounts about special needs children which were so relentlessly upbeat that I felt totally alone in not always feeling that way! I hope to talk to you more about your daughter, and Happy New Year!