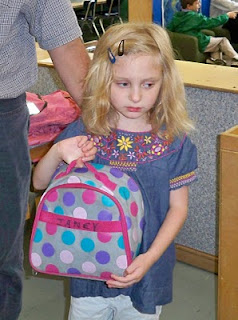 Janey started school a week ago. For the most part, it's been good. I hated leaving her the first day---she had such a "where am I? What's going on?" look on her face. But we got good reports that day and the next few. The special ed teacher is out on maternity leave, but the long term sub seems great. Janey is really in love with the aide (who is more like a teacher in terms of education and experience), and she seems to be making friends with the new students.

However, on Thursday we got a call at noon she had a high fever. About 2 weeks ago, the same thing happened---she spiked quite a high fever off and on for a few days, we took her to the dr., no strep, nothing wrong. I took her again last Friday, and again, nothing wrong but the fever, which at that point was not even there either. My sister used to do the same thing---just get a high fever with nothing else. I hope she's okay, and I hope she doesn't have to miss any more school. Today was like starting again. She had the same look on her face---Why am I here? What's going on? Routines seem very hard for her to grasp. I think most kids with autism like routines and schedules, but Janey doesn't seem to, or doesn't get them, anyway. She seems always very surprised by what comes next, even if we've done it the same way for years. She likes new things. I don't get any sense that picture schedules or verbal prompts about what comes next mean a thing to her.

On another note---my older son William turns 16 today. I am so proud of him. He was a preemie, and when he was younger, diagnosed with Aspergers. I don't think he ever really had it---I think it just took him a while to outgrow the preemie-ness. He's been tested several times in the past 4 or 5 years, and no longer meets the "qualifications" of Aspergers, and he hasn't been on an IEP for 5 years now. He's quirky---all my favorite people in the world are quirky. He's one of the main reasons I don't believe in miracle cures. He could be held up as one---at age 2, he was diagnosed as (but we weren't told) having classic autism. But he didn't, and aside from loving him and using school services and just waiting it out, we did nothing extreme---no special diets or therapies or so on. And in knowing him and knowing Janey---there is no comparison. You can be with Janey for half a minute and you know something is up. She never passes for "normal"---he always could, because, well, aside for some oddities, he was. I'm sure we have some kind of gene which pre-disposes us to traits that fall along a long spectrum, from slightly socially awkward to full blown autism. Or, in Freddy's case, to being extremely at ease socially and quite a leader. Anyway, I am so thrilled with the man William is becoming. He's very talented musically, he is tall and handsome and interesting and bright. He is more devoted to the study of Latin and history than almost anyone. He's fantastic, and I am so lucky to be his mother (as I am so lucky to be Freddy's mother and Janey's mother---I am lucky all around)
Posted by Suzanne at 2:20 PM