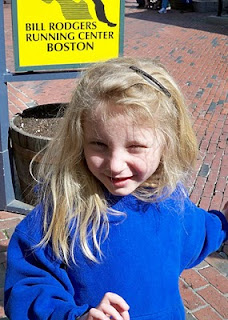 Lately I've been realizing there is just so much I can do in life, and sometimes I have to just preserve my sanity by not doing things I just feel like I can't do. I won't get into all the details, but I had made plans to do something for a friend, and just felt like I'd hit a wall and couldn't take doing it---it would have involved a long car trip and a weekend away and I knew it would be hell on wheels with Janey upset the whole weekend and me exhausted (I was sick on and off for a month) and I just drew the line. I am not sure if it was the right thing to do, as I know I hurt the friend very much, but I am not going to be a good mother to Janey if I am not able to function. It is hard as I know that no-one without a child like Janey really, REALLY gets it! (Thanks for being out there, Michelle!) Even days she seems happy and cheery and sweet, it can all turn in a second. The picture here is from today---we went into the city to a free concert by There Might Be Giants. Janey enjoyed the concert overall---she jumped up and down non-stop and didn't cry, but I had to hold her hand EVERY second as if we let go even for a second, she bolted into the huge crowd and someone had to run as fast as possible to grab her. She's a fast runner. And I was on edge every second, hoping she would stay in a good mood, not freak out, not get lost, not ruin everyone's day. I can't say it was enjoyable for me. But probably no-one there would have guessed that---I am not going to be grouchy at all times and not smile and remind everyone how hard my life is, and they can't read my mind, so I think sometimes since I am the one responsible for her and no-one else ultimately (when Tony isn't there), it is just impossible for them to really, really understand. Actually, Janey has been great lately a lot of the time. She actually sat through TWO meals out and allowed us to enjoy our meals. But when I say she's been great lately, I edit out the at least hour or two each day probably she spends crying, either off and on or non-stop. And I edit out all the things we don't do or have to do to keep her happy---all the times the boys don't get attention, or we don't go someplace we'd like to, or I am just vigilent making sure she isn't running away or eating things that aren't food or exploring the contents of her diaper or taking off her shoes and socks outside or taking toys from other kids or so on and so on and so on. I sound like one big run-on complaint here, but I decided when I started this blog that here was my place to vent, because so much of the time I am concealing how I'm really feeling.

Anyway, after all that rambling, I worry I've really lost a close friend by drawing the line about what I felt I could do. I don't want to lose friends, but I guess my family has to come first, and because Janey is the one in the family that has the most needs and needs me most, I can say Janey has to come first. And to be able to be there for Janey, sometimes I have to put my own needs first. And that's the hardest part.
Posted by Suzanne at 9:28 PM